The AVILA BEACH PARTY returns to the Central Coast on Friday night, May 23rd at 5PM. This is your Summer Beach Party! Past year’s artists have included LMFAO, MGMT, Dev and the Cataracs, Shwayze, and Above & Beyond… This year’s event features the top ranking female DJs in the world, NERVO plus very special guests CASH CASH, Manufactured Superstars and Tasty Treat.

These multi talented DJ dynamos are the all­time top­ranking female DJs in the world, voted by their legions of fans to No. 16 on DJ Magazine’s influential 2013 “Top 100 DJs” poll. In­demand and beloved across the globe,  their  nonstop  schedule  takes  them  from  the  shimmering  beaches  of  Ibiza,  to  their  studio  in  their home­away­from­hometown of London, to the towering Main Stage of Electric Daisy Carnival in Las Vegas. And everywhere they go, their infectious energy, fearless personal style, and deep love and understanding for the music precedes them. Mim and Liv’s career caught fire in 2009, when they co­wrote the the emphatic and grand global hit “When Love Takes Over” – for David Guetta and Kelly Rowland. But their journey into dance music started years prior in the festival fields of their native Australia, when as teenagers they went all­out for life­changing electronic acts like The Prodigy, Basement Jaxx, and Fatboy Slim.

“Purple hair and purple lipstick; we did it all,” says Mim. “We almost broke ribs being in the front row of the mosh pit. We were those people in the crowd for so many years, to be playing on the same bills with some of those artists now is just electrifying”. Having cemented their songwriting prowess with a global No. 1 (plus several other songs for artists like Ke$ha, Kylie Minogue and Armin Van Buuren), NERVO set out to pursue their own career as artists, quite literally writing their own songs under their own name. Their friends and collaborators in the world showed up to support them. “We’re All No One” with Afrojack and Steve Aoki (No. 8 on the Billboard Hot Dance Club Songs chart),”The Way We See The World” with Afrojack, Dimitri Vegas and Like Mike (the official anthem of Tomorrowland 2011, which has garnered over 34 million YouTube views), “Reason” with Hook N Sling, “Something to Believe In” with Norman Doray, “Like Home” with Nicky Romero (their first No. 1 topping the Beatport chart for 3 weeks), “Turn This Love Around” with Armin Van Buuren (off the No. 1 DJ’s new album Intense): Their list of A­list collaborators is dance music’s longest and most enviable, and in a world dominated by bros, that’s one hell of a sister act. They can do it for themselves too: NERVO original “You’re Gonna Love Again” has over 8.3 million views and their 2013 single “Hold On” (#1 on the Billboard Club Play chart) has garnered 3.4 million views.Normally we open our DJ sets with one of our own records, and the second that happens and you see the hands go up, it’s game on,” says Liv. “We’ve worked so hard in our industry behind the scenes, to step out and be releasing records in our own name is a whole different energy, a whole different world. It really is addictive and so rewarding”

Fortunately the girls can get a regular fix during their residencies and headlining sets at some of the top venues and events in the world including the new Las Vegas mega­club Hakkasan and Ibiza Beach Club Ushuaia (home  to  their  #NERVONation  parties).  NERVO  are  also  regular  Main  Stage  performers  at  festivals  like Tomorrowland, Electric Daisy Carnival, Ultra Music Festival, Creamfields, and Electric Zoo as well as embarking on Headlining tours of their own in Mexico and beyond! Wherever it may be the sisters are always playing to their devoted fans who wear homemade NERVO t shirts and hoist signs (“Will you marry me?”; “Lesbians for NERVO”), curve their hands into heart shapes, and post photos and poems to show their love and appreciation. NERVO has seen rapid growth across their social media channels including 182K Instagram followers, 293K Twitter followers and over 1.4 million likes on Facebook.

Style, savvy, positivity and talent: It’s no wonder that NERVO was invited to join the ranks of the legendary beauties who can call themselves CoverGirls, named to the iconic CoverGirl brand’s family of spokeswomen last year. The partnership is just one more fabulous chapter in the developing NERVO story, a tale told in sweat, smiles, nail polish, neon, and no small amount of pixie dust.

NERVO  are  regularly  featured  in  Vogue,  Elle,  Cosmopolitan,  NYLON,  In  Style,  People  and  other fashion/pop culture publications around the globe. In August 2013 NERVO performed live from the red carpet at the MTV Video Music Awards and in November they will appear on BRAVO TV as guest judges on the Rihanna produced reality show ‘Styled To Rock’. 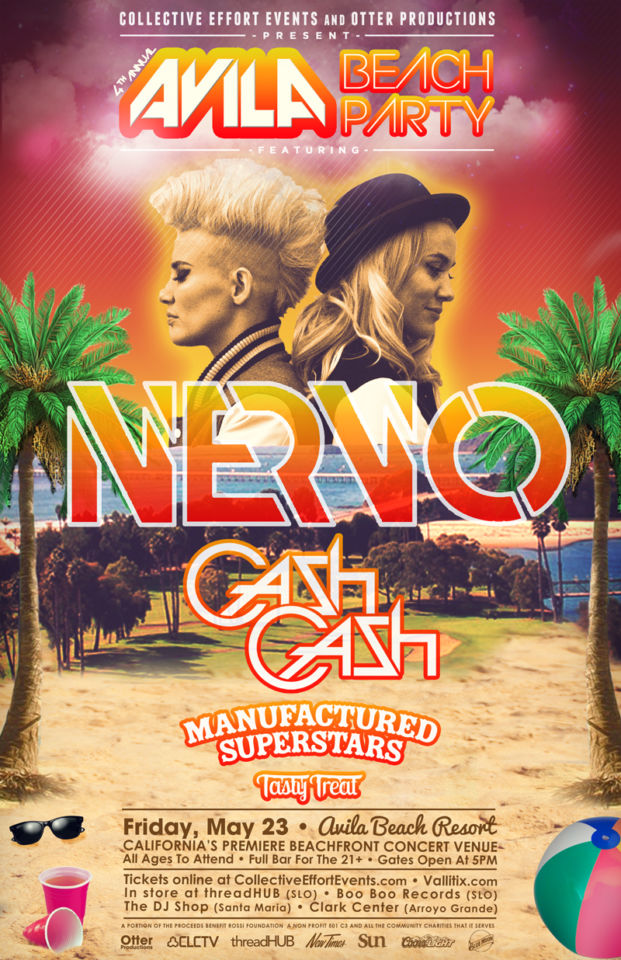