Nashville, TN – July 11, 2014 – “He prowls the stage, delivering the bluesy stuff in a whiskey-burn howl, shouting the rock stuff … from ballads to bombast,” The Tennessean recently declared of John Hiatt. John Hiatt, solo and acoustic, returns to the Central Coast on Friday night, March 11, in an all ages show at the Historic Fremont Theatre in downtown San Luis Obispo. John Hiatt will be performing some of his most beloved songs, (perhaps) including “Crossing Muddy Waters,” “Thing Called Love,” and “Have A Little Faith In Me” as well as several off his new album, Terms Of My Surrender (July 15, 2014; New West Records) in an intimate, solo acoustic format that puts the singer/songwriter center stage.

Terms Of My Surrender is the latest chapter in Hiatt’s prolific run of releases. The press has been stellar both in the US and UK. Mojo awarded the record four stars and exclaimed: “[Terms Of My Surrender] digs deeper into acoustic blues than he’s ever dug before. Recorded live in the studio with his road band The Combo, from the simple blues ‘Nothing I Love’ to the sinister ‘Wind Don’t Have to Hurry,’ Hiatt sounds throughout as if he’s gargling a box of frogs in some eternal late night New Orleans backroom. And it’s glorious.” Uncut declared: “the past, present and future intertwine on the veteran’s latest effort… Its songs are blues-based reflections recalling the sauntering grooves of JJ Cale, the gritty swamp rock of Tony Joe White and Bob Dylan’s Modern Times throughout. No Depression remarked: “He still sounds as funky and nimble as ever and obviously has retained his sense of humor – his sarcasm hasn’t dropped a notch. This old person is the one we want breaking in front of our line for the foreseeable future; cranky, pushy and magnificently mean-spirited in the best possible way.” Blogcritics simply called it his “best album since 2000′s Grammy-nominated Crossing Muddy Waters.”

Hiatt’s songs have been recorded by artists as diverse as Bob Dylan, Bonnie Raitt (“Thing Called Love”), Emmylou Harris, Iggy Pop, Rosanne Cash (#1 country hit, “The Way We Make A Broken Heart”), the Jeff Healey Band (“Angel Eyes”), and even the cartoon bear band of Disney’s film, The Country Bears. He earned a Grammy nomination for Crossing Muddy Waters, while B.B. King and Eric Clapton shared a Grammy for their album Riding With The King, the title track from which was a Hiatt composition. Hiatt has received his own star on Nashville’s Walk of Fame, the Americana Music Association’s Lifetime Achievement Award for Songwriting, has been inducted into the

Nashville Songwriters Hall of Fame and was saluted at the Indiana Governor’s Arts Awards.

Advance general admission tickets ($40 plus handling fees) are on sale NOW at all VALLITIX outlets including Boo Boo Records in SLO. Charge by phone at (888) 825-5484, order on line at: www.vallitix.com 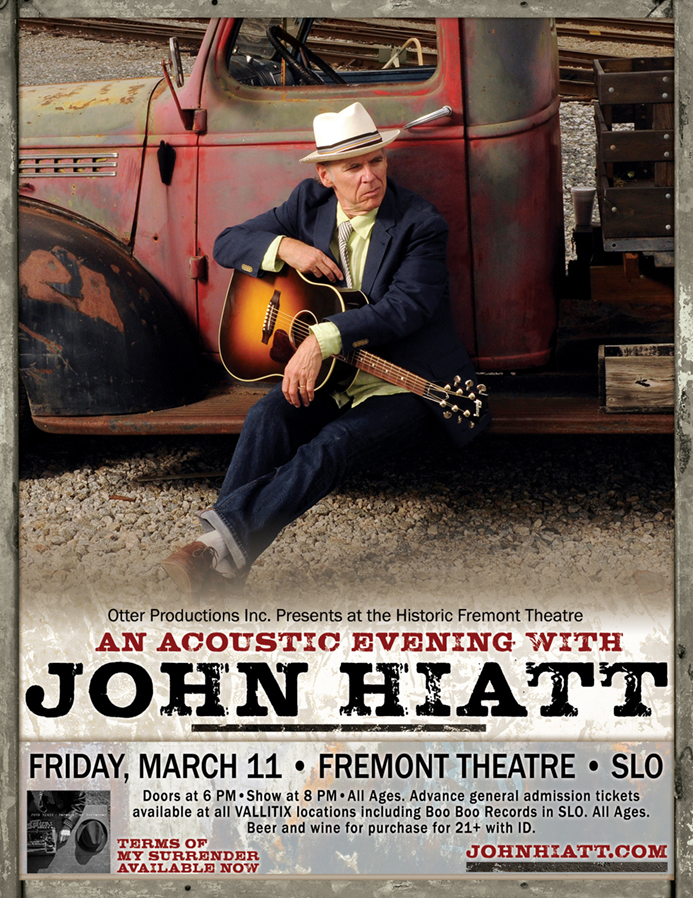 Advance general admission tickets ($40 plus handling fees) are on sale NOW at all VALLITIX outlets including Boo Boo Records in SLO. Charge by phone at (888) 825-5484, order on line at: www.vallitix.com .