Otter Productions continues with the FREMONT THEATRE COMEDY CLUB with Ralphie May and special guests on Friday night, July 11th at the Fremont Theatre in downtown San Luis Obispo. With the goal of bringing world class comedy on a regular basis to the classic downtown SLO art deco theatre, Otter Productions welcomes Ralphie May in his debut SLO performance! When San Luis Obispo’s Fremont movie theater opened its doors on Memorial Day 1942, the star-studded premiere drew celebrities such as boxer Max Baer and comedic duo Stan Laurel and Oliver Hardy — along with hundreds of servicemen stationed at nearby Camp San Luis Obispo and Camp Roberts. Now, 70 years later, comedy returns to the iconic Fremont Theatre with The Fremont Theatre Comedy Club and Ralphie May.

Voted one of Variety’s “10 Comics to Watch” in 2008, Ralphie May has filmed a record-setting three separate 1-hour Comedy Central Specials in the past three consecutive years, all of which were among the networks most highly-rated.  He’ll be filming a new special on October 1st at the Pabst Theater in Milwaukee, proving that Ralphie’s relatable comedic genius is in higher demand than ever.

Since his debut on season one of “Last Comic Standing,” audiences can’t get enough of the larger than life comedian.  Ralphie has a proven track record of selling out multiple shows in 1,500 to 3,000 seat venues.  He has a no nonsense point of view and the ability to connect with a diverse audience by pointing out society’s hypocrisies.  Ralphie doesn’t shy away from touchy topics or ethnic jokes, nor does he bite his tongue when society suggests, because he sincerely believes that as long as what he’s saying is true, people need to hear it.

Born on February 17, 1972 in Chattanooga, Tennessee and raised in Clarksville, Arkansas, Ralphie was one of four kids raised by his single mom.  At the age of seventeen he won a contest to open for his idol, Sam Kinison.  He later moved to Houston to develop his comedy routine, at Kinison’s suggestion.   “All the comics I’ve ever admired, whether it be Kinison, Lenny Bruce, Buddy Hackett or Richard Pryor, all share a commonality,” says May.  “They’re a tour de force.  When they speak, there’s no room for rebuttal.  They’ve thought it all out.  Even the pros and cons of their argument, they raise openly and debate in the midst of their conversation and it’s a beautiful thing to watch.”

On the small screen, Ralphie has worked as a writer and producer on ESPN’s “Mohr Sports” starring Jay Mohr and performed stand-up on numerous late night talk shows including four appearances on CBS’s “The Late Late Show w/ Craig Kilborn” as well as eleven appearances on “Jimmy Kimmel Live.”  He has appeared on“The Man Show”and MTV’s “Bash” as well as guest-starred on NBC’s “Whoopie.”   As if that’s not enough, he’s also one of a handful of comedians to have received a standing ovation on “The Tonight Show w/ Jay Leno.”

When he’s not on the road, Ralphie divides his time between Nashville and Los Angeles with his beautiful wife Lahna, their two wonderful dogs Pimp and Hoochie Mama, and their two children, April June May and August James May.  He contributes much of his time and energy to helping others.  Since establishing a residence in Nashville, he has been actively involved with the 100 Club of Nashville, various youth organizations and the Humane Society. 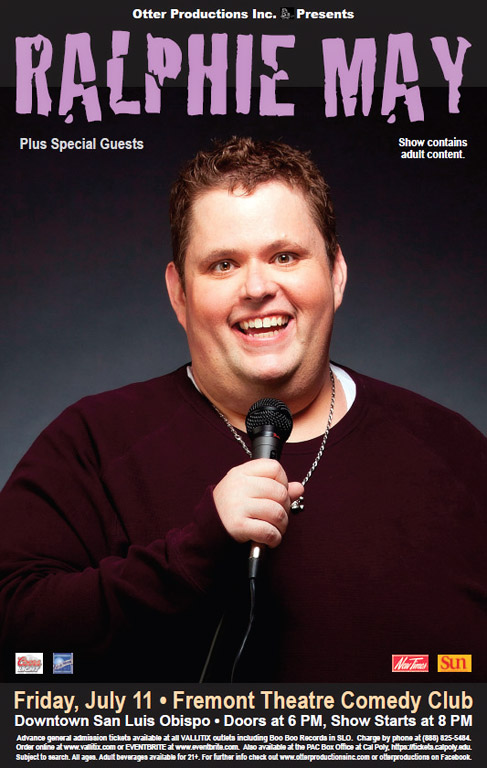 ADULT MATERIAL! Advance general admission tickets ($30 plus handling fees) are on sale now at all VALLITIX outlets. Charge by phone at (888) 825-5484, order on line at: www.vallitix.com . Also available at eventbrite.com and on the Cal Poly Campus at the PAC Box Office and polytix.com. LIMITED VIP TICKETS ($50 plus handling fees) AT VALLITIX ONLY AND INCLUDE PRIORITY SEATING UP UNTIL CURTAIN AND A MEET AND GREET WITH RALPHIE MAY.